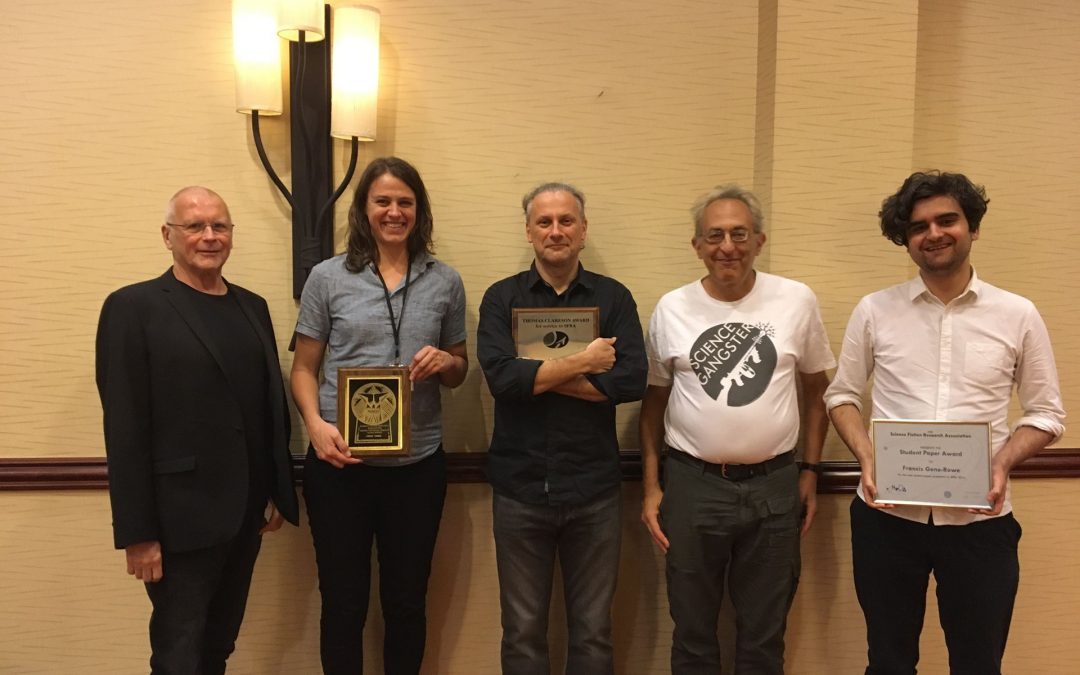 The Science Fiction Research Association (www.sfra.org) is very pleased to announce the winners of this year’s SFRA awards, which were presented at the annual meeting of the organization, held this year in Riverside, CA, from June 28-July 1, 2017.

Student Paper Award, which recognizes the best student paper as presented at the previous year’s conference:

Francis Gene-Rowe, for “You Are The Hero: Stephen Mooney’s The Cursory Epic.”

Honorary Mention: Brittany Roberts, for “’The Present Doesn’t Exist’: Music, Animation, and the Rupture of Cultural Memory in Vladimir Tarasov’s The Passage.”

Mary Kay Bray Award, given for the best essay, interview, or extended review to appear in the SFRA Review in a given year:

A.P. Canavan, for his review of Netflix’s Daredevil and Jessica Jones

Pioneer Award, which recognizes the writer or writers of the best critical essay-length work of the year (2016):

Lindsay Thomas, for “Forms of Duration: Preparedness, the Mars Trilogy, and the Management of Climate Change,” American Literature 88.1 (March 2016)

Also at the meeting, the University of California, Riverside presented its Science Fiction and Technoculture Studies Program Book Award to Steven Shaviro for his Discognition (Repeater Books, 2016). Honorary mention went to Rebekah Sheldon for The Child to Come: Life After the Human Catastrophe (University of Minnesota Press, 2016) and Scott Selisker for Human Programming: Brainwashing, Automatons, and American Unfreedom (University of Minnesota Press, 2016).

Congratulations to all winners!